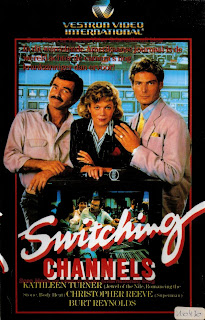 Switching Channels
N° : 57188 / 87188
Country : Belgium & The Netherlands
Year : 1989
Running time : 105 minutes
Actors : Kathleen Turner, Christopher Reeves, Burt Reynolds
Director :Ted Kotcheff
Story : Sully is the producer of a cable news network program. Christy is his ex-wife and best reporter. Her desire to quit the news business and marry Blaine, a sporting goods manufacturer comes as an innocent man is about to be executed. Sully's attempts to keep her in town and break up her upcoming marriage happen against the backdrop of a botched execution, a prison break and a possible pardon.
Posted by Dan at 1:55 AM