The Warrior & The Sorceress 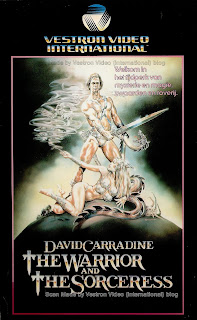 The Warrior And the Sorceress
N° : 55060
Year : 1986
Country : Belgium & The Netherlands
Running time : 81 minutes
Actors : David Caradine, Luke Askew, Maria Socas, Antony Delongis
Director : John Broderick
Story : The mighty warrior, Kain, crosses the barren wastelands of the planet Ura, where two arch enemies, Zeg and the evil degenerate Balcaz, fight incessantly for control of the village's only well. Kain sees his opportunity and announces that his sword is for hire...but his eyes stay clearly on the beautiful captive sorceress Naja, and his newly awakened purpose
Swedish Version here Warrior And the Sorceress (the)
Posted by Dan at 2:00 AM

Labels: 1986, Belgium/netherlands, In Collection, Warrior And the Sorceress (the)

First time here. EXCELLENT idea for a blog. I am a HUGE fan of Vestron Video myself. Nice!

Dan, I have some new vestron sleeves you may not have, drop a line and I'll send you the ones you need.