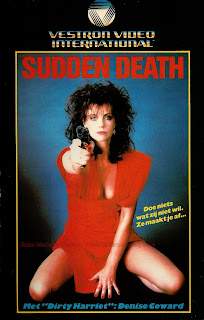 Sudden Death
N° : 55117
Country ; Belgium & The Netherlands
Year : 1986
Running time : 90 minutes
Actors : Denise Coward, Frank Runyeon,Jaime Tirelli, Robert Trumbull, Rebecca Hollen
Director : Sig Shore
Story : Valarie is a happy, successful career woman, engaged to a charming and handsome man. She drives a great car and lives in a beautiful apartment. Then one night she hails the wrong taxi. She is brutally raped by the two car thieves who were taking a joyride. They leave her on the sidewalk to die after they're done with her. When she recovers, her fiancée abandons her, and with the police unable to help much in tracking down her attackers, Valarie buys a gun and takes to the gritty streets after dark, luring and killing street thugs who accosted her while searching for the two thugs to get her revenge. She becomes known in the press as the 'Dum-Dum Killer' because of the hollow-point bullets she pattens out and uses. At the same time, she begins dating a sympathetic police detective, named Marty, who takes an interest in her rape case, while tracking down the 'Dum-Dum Killer', and when he begins to suspect her, he is torn between upholding the law and protecting his newest love interest.
Posted by Dan at 1:16 AM