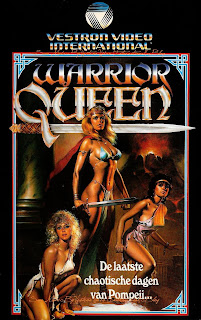 Warrior Queen
N° : 55198 / 85198
Year : 08-04-1987
Country : Belgium & The Netherlands
Running time : 81 minutes
Actors : Sybill Danning, Donald Pleasence, Richard Hill
Director : Chuck Vincent
Story : In ancient Pompeii, slaves are bought and sold for household chores and sex. A mysterious queen moves among the elite, meantime secretly helping the slaves to escape. Eventually her life is also in jeopardy, and as the volcano erupts she and the slaves attempt to escape while being chased by the military...
Uk sleeve scan here: Warrior Queen

Thanks for the kind words on my blog. Your scans are fantastic! Thanks for sharing. Great stuff! :)