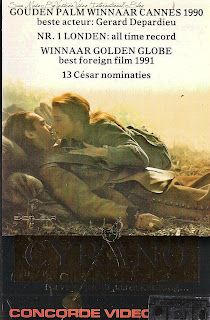 Cyrano de Bergerac
N° : 10206
Year : 1992
Country : Belgium & The Netherlands
Running time : 137 minutes
Actors : Gerard Depardieu, Vincent Perrez, Roland Bertin, Jacques Weber, Anne Brochet
Director : Jean-Paul Rappeneau
Story : A dashing officer of the guard and romantic poet, Cyrano de Bergerac falls in love with his cousin Roxane without her knowing. His one fault in his life, he feels, is his large nose and although it may have been a forming influence in his rapier-sharp wit, he believes that Roxane will reject him. He resorts to writing letters to her on behalf of one of his cadets, Christian, who is also in love with Roxane but just doesn't know how to tell her. She falls for the poetic charm of the letters but believes that they were written by Christian
Posted by Dan at 7:47 AM