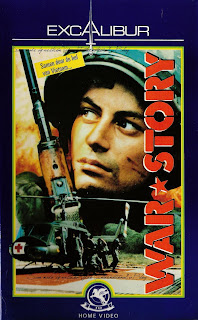 War Story
Aka : Vietnam War Story II
N° : 10004
Year : 15-12-1989
Country : Belgium & The netherlands
Running time : 90 minutes
Actors : Wesley Snipes, William Frankfather, Tim Guinee
Director : Jack Sholder,David Burton Morris,Lesli Linka Glatter & Michael Toshiyuki Uno
Story : Author: Matthew Duren from San Francisco, CA wrote:
This movie actually consists of three 30min episodes. The first revolves around an idealistic soldier who's new to the Vietnam scene . A young Wesley Snipes is there to rain on his parade and show this bumpkin the harsh realities war. Episode 2 has a young Lt. getting 7 days of R&R in Hawaii with his fetching wife (Cynthia Bain). His experiences in Vietnam, however, have apparently rendered him both impotent and near-comatose and the story deals with his difficulties adjusting to everyday life as well as his inability to communicate with his spouse. the 3rd episode involved a plot by a bunch of grunts to frag their commanding officer who, they felt, was getting too many of them killed.(full review on imdb)
Posted by Dan at 11:54 PM