The Marx Bros. : In a Nutshell 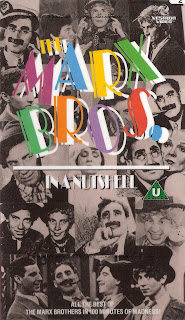 The Marx Bros. : In a Nutshell
N° : VA 17245
Year : 1990
Country : U.K.
Running time : 100 minutes
Actors : Gene Kelly, Chico Marx, Groucho Marx, Harpo Marx, Margret Dumont
Director : Richard Patterson
Story : Author: Glenn Andreiev from Huntington, NY wrote :
THE MARX BROTHERS IN A NUTSHELL is prime viewing for a Marx Brothers fan. It does take the expected route of tracing the origins of the Marxes, from their early days in the New York/Coney Island vaudeville circuit almost a hundred years ago, onto Broadway in the 1920's and finally Hollywood. There are great "chapters" on each brother, including the never filmed Gummo. These insightful chapters give facts such as straight man Zeppo was considered the funniest Marx Brother (He's actually hysterical in ANIMAL CRACKERS) Chico had a gambling problem, and Harpo was a loving family man. There are great film clips, including a seldon seen 1931 short they did at Paramount where the Marxes menace a helpless talent scout. The perfect film to see after HORSEFEATHERS or DUCK SOUP. (source IMDB)
Posted by Dan at 12:04 AM