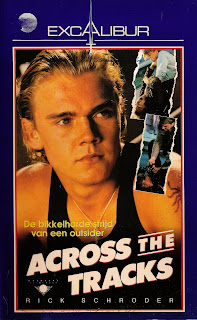 Across The Tracks
N° : 10093
Year : 28-08-1990
Country : Belgium & The Netherlands
Running time : 100 minutes
Actors : Rick Shhroder, Brad Pitt, Carrie Snodgers
Director : Sandy Tung
Story : When Billy returns from reform school he has to attend a different high school at the other side of town. He tries to start with a clean slate but his old rival doesn't make it easy on him and his buddy Louie tries to make him go astray again. His brother Joe, quite the opposite of Billy, is a good runner and determined to win a track scholarship. He suggests Billy to join his school's track team, which pits the two brothers against each other...
Posted by Dan at 11:51 PM

Labels: 1990, Across The Tracks, Belgium/netherlands, Excalibur, In Collection