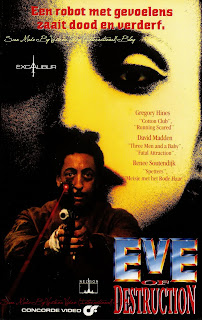 Eve of Destruction
N° : 10184
Year : 1992
Country : Belgium & The Netherlands
Running time : 100 minutes
Actors : Gregory Hines, Renee Soutendijk, David Madden
Director : Duncan Gibbins
Story : Eve is a robot, modelled on "her" creator. Eve's armoury includes a nuclear bomb, which for unexplained reasons is on-board during Eve's testing. When things go wrong during the tests, Eve is lost in the big city. Enter the rescue team, which includes the real (human) Eve. They must find and disarm her before she goes "bang". Eve is programmed to protect herself at all costs, so when she runs into a problem, she resorts to her super strength; hence the destruction
Posted by Dan at 8:00 AM

Haven't seen this yet, but it looks like fun. Gregory Hines is always good. He will be missed.

It's a decent action Thriller. good for an hour and a half entertainment.
If you have a chance to find it buy it I think in the USA it's released by Mgm.