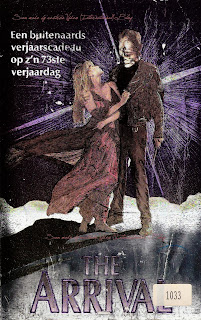 The Arrival
N° : 10892
Year : 1992
Country : Belgium & The Netherlands
Running time : 90 minutes
Actors : John Saxon, Joseph Culp, Robin Frates,
Director : David Schmoeler
Story : When an old man witnesses a strange meteor land, he finds himself growing younger, but his renewed youth has a price; he must kill or die. He is a vampire, but it is not blood he needs to satisfy his cravings. A series of murders in which several women are brutally slain leads the police on a confusing chase across several states.
Posted by Dan at 11:33 PM