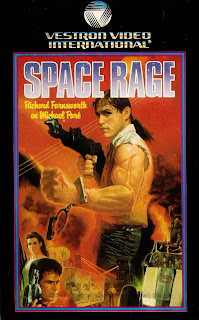 Space Rage
N° : 59928 / 89928
Year : 25-09-1987
Country : Belgium & The netherlands
Running time : 90 minutes
Actors : Richard Farnsworth, Michael Paré, lee Purcell, William Windom, Harold Sylvester, John Laughlin
Director : Conrad E. Palmisano
Story : In this sci-fi/western film set two hundred years from now, a bank robber, Grange is captured and sentenced to the penal colony on the mining planet Proxima Centauri 3 where he meets bounty-hunter Walker, and the Colonel, a retired policeman from LA who was considered the best of his kind. Grange is a dangerous lunatic and Walker and the Colonel must team up to keep him from escaping.