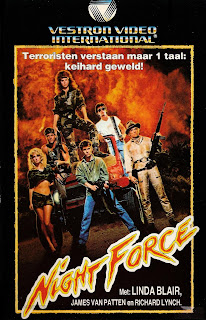 Night Force
N° 59960 / 89960
Country : Belgium & The Netherlands
Year : 09-06-1987
Running time : 82 minutes
Actors : Linda Blair, James Van Patten, Richard Lynch, Chad MCQueen, james Marcel, Dean miller, bruce Fisher, Claudia Udy, Cammeron Mitchell
Directed by : lawrence D. Foldes
Story : In a nutshell, a wimpy damsel in distress, daughter of a senator, is kidnapped by clichéd Latino terrorists and hauled off to some banana republic as a hostage. Now her father, a senator who pushes for no negotiations with terrorists, decides he'd rather loose his kid than his job and we are made to believe that the United States government is absolutely NOT going to recuse a senator's daughter. ( author AshXF source IMDB)
Posted by Dan at 1:22 AM