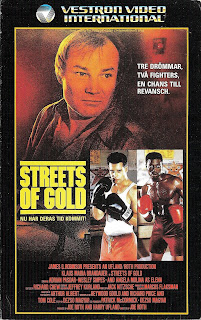 Streets of Gold
N° : S 265199
Year : 1987
Running time : 94 minutes
Country : Sweden
Actors : Klaus Maria Brandauer, Adrian Pasdar, Wesley Snipes , Angela Molina
Director : Joe Roth
Story : Alek is an immigrant from the Soviet Union who was a talented boxer in his day, but he was not allowed on the Soviet national team because he was a Jew. Depressed and discouraged, he meets two young amateur boxers. As their coach, he trains them for glory.
Posted by Dan at 6:32 AM