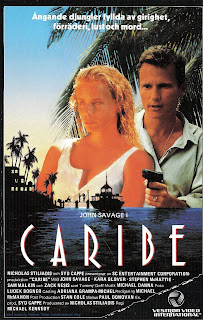 Caribe
N° : S 267076
Year : 1988
Country : Sweden.
Running time : 83 minutes
Actors : John Savage, Kara Glover, Stephen McHattie, Sam malkin
Director : Michael Kennedy
Story : Two explosives specialists who work together are involved in a scam down in Belize. They travel there to make the deal, but do not realize they are being followed by a British Secret Intelligence Agent (John Savage). The agent comes upon the dealers and soon bullets fly, causing the explosives expert Helen (Kara Glover) and the Intelligence Agent Jeff (Savage) to flee for their lives. While Helen and Jeff hide in the bush, they soon fall for one another and eventually hatch out a plan to wipe out the explosives dealers all together. In obliterating the dealers, they also detonate the explosives and later Helen realizes she will be a wanted woman back in the states. With Jeff's help, she obtains a new identity and he says that he will take care of her no matter what happens.
The Belgian / Netherlands & UK edition here : caribe
Posted by Dan at 6:25 AM