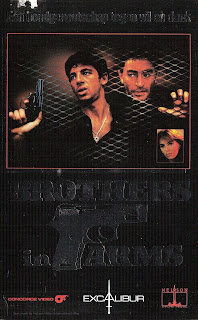 Brothers in Arms
Aka L'union Sacrée
N° : 10116
Year : 1991
Running time : 95 minutes
Country : Belgium & The Netherlands
Actors : Patrick Bruel, Richard Berry, Corrine Dacla, Bruno Cremer, Said Amadis
Director : Alexandre Arcady
Story :
Simon, a Jewish police inspector, arrests Karim, a Muslim, in the bust of a drug smuggling cargo ship, only to realize that Karim is an undercover agent from the military intelligence, whose mission he was not aware of. The two men pursue the narc investigation, which will lead them to confront middle eastern terrorists together. ( Source IMDB written by ElCabri)
Posted by Dan at 11:46 AM