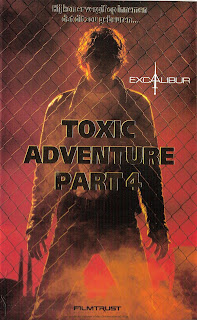 look Who's Toxic
Aka : Toxic Adventure part 4
N° : 10096
Year : 1991
Running time : 92 minutes
Country : Belgium & The Netherlands
Actors : Chris Robinson, Luis Lemus, Shelley Stolaroff, Alex Morris, Torin Coyle Caffrey
Director : Louis Mathew
Story : This film looks like it was made on an extremely tiny budget. It has some of the grotesque humour found in classic splatter horror films of the eighties, but is surprisingly low on gore (except for a few nasty incidents). The acting is mostly amateurish. Good fun. "I want a young strong heart and I want it now!" ( source IMDB, Written by Henrik Larsen)
Posted by Dan at 11:53 AM