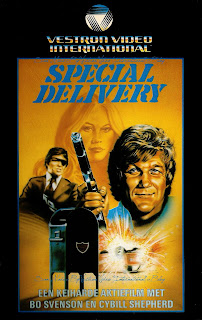 Special Delivery
N° : 56802
Year : 31-07-1986
Country : Belgium & The Netherlands
Running Time : 99 minutes
Actors : Bo Svenson, Cybill Shepherd, Tom Atkins
Director : Paul Wendkoss
Story : gang of thieves plan a daring bank robbery, making their escape across the rooftops of Los Angeles. The police are quickly called in, however, and only one of the robbers, Murdock, makes a clean getaway. Unfortunately, in order to do so, he is forced to dump the stolen cash into a mailbox, which he then finds is locked until midnight, forcing him to wait until the mailman makes his late night pickup. As he waits, he discovers that his hiding place has been observed by several other people, all of whom want a share of the loot.
2 different Swedish releases here : Special Delivery
Posted by Dan at 9:39 AM