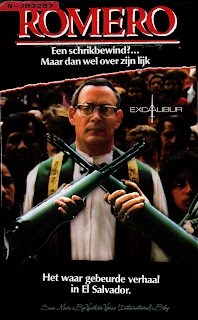 Romero
N° : 10099
Year : 1991
Country ; Belgium & The Netherlands
Running time : 86 minutes
Actors : Raul Julia, Richard Jordan, Ana ALicia, Tony Plana
Director : John Duigan
Story : Romero is the true story of the catholic priest Archbishop Oscar Romero who lived in El Salvador during the political unrest in the 1980s. The government has launched a 'terror campaign' against the guerillas in an attempt to crush them. Archbishop Romero's protests against governments' actions is perceived as disloyalty. As an example to others, the government begins to destroy churches and murder priests. Despite persecution, Romero continues to speak out against the atrocities the government is committing against the people of El Salvador, until his untimely death.
Posted by Dan at 12:38 PM