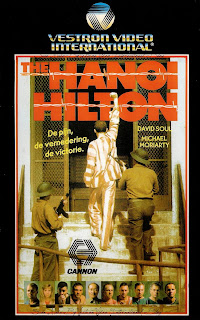 The Hanoi Hilton
N° : 57124 / 87124
Year : 1988
Country ; Belgium & The Netherlands
Running time : 123 minutes
Actors : Michael Moriarty, Jeffrey Jones, Paul Le Mat, Stephen Davies, Lawrence Pressman, Aki Aleong, Gloria Carlin
Director : Lionel Chetwynd
Story : A drama focusing on the suffering, torture, and brutal treatment the American P.O.W.s had to deal with daily while in North Vietnam's Hoa Lo Prison, the most infamous P.O.W. camp in Hanoi. The film focuses on the resistance the prisoners gave to their captors and the strong bonds formed by the Americans during their captivity.
Posted by Dan at 12:33 PM