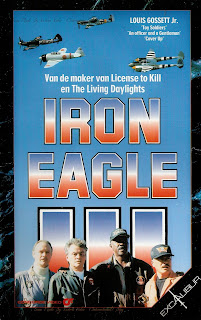 Iron Eagle III
N° : 11107
Country : Belgium & The Netherlands
Year : 1992
Running time : 95 minutes
Actors : Louis Gossett Jr., Paul Freeman, Horst Buchholz, Christopher Carenove, Sanny Chibu
Director : John Glenn
Story : Chappy discovers a drug-smuggling scheme at his own air base. It turns out that the lives of some village people in Peru are at stake, and he decides to fly there with ancient airplanes and friends to free them
Posted by Dan at 12:00 AM