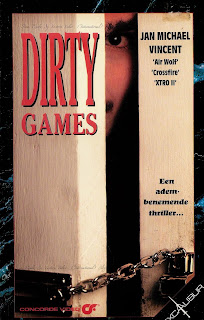 Dirty Games
N° : 10279
Year : 1992
Country ; Belgium & The Netherlands
Running time : 96 minutes
Actors : Jan Michael Vincent, Valentina Vargas, Ronald France, michael Mc Covern
Director : Gray Hoffmeyer
Story : Author: cojosh from United States wrote on IMDB
This is your typical tale of a race against the clock. Throw in a nuclear storage facility, a bomb and you get the picture. It is also has two plots. The terrorist that is going to blow up the facility also murdered the leading-lady's father a few years before. I'm not going to say whether the bomb explodes or not, neither am I going to advise anyone to waste the time to find out.
Posted by Dan at 12:05 AM