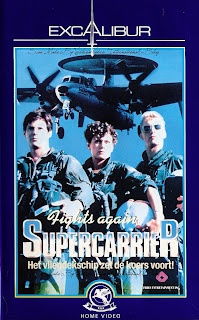 Suppercarrier Fights Again
N° : 10007
Year : 1990
Country : Belgium & The Netherlands
Running time : 96 minutes
Actors : Robert Hooks, Ken Olandt, Cec Verrell, John David Bland, Richard Jaeckel
Director : Corey Allen & Jackie Cooper
Story : Author: tom_jeffords from Selma AL wrote :
This really might have made it. Supercarrier was an attempt to cash in on the popularity of the megahit Topgun. It could have been done, note how well JAG has done over its run. Where the network messed up was instead of trying to concentrate on the action, it tried to make a nightime soap on the water. The US Navy took one look at the pilot which featured a female officer sleeping around and a male pilot altering his records to allow him to keep flying and said "No thank you" and withdrew its support. Kind of hard to have a show about an aircraft carrier with no aircraft carrier. End of show.
Posted by Dan at 10:35 PM