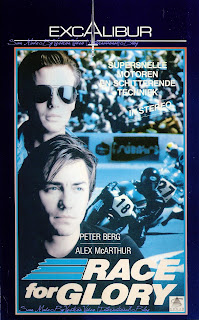 Race For Glory
N ° : 10075
Year : 17-04-1990
Country : Belgium & The Netherlands
Running Time : 100 minutes
Actors : Alex McArthur, Peter Berg, Pamela Ludwig, Ray Wise
Director : Rocky Lang
Story : A member of an up and coming motorcycle racing team abandons his teamates to join a rival team. He ends up playing second fiddle to the champion of the new team. Not satisfied, and against the wishes of his new boss, he tries to beat the champion but fails. He leaves racing, eventually to return and reunite with his old friends in an attempt to win the Grand Prix.
Posted by Dan at 10:49 PM