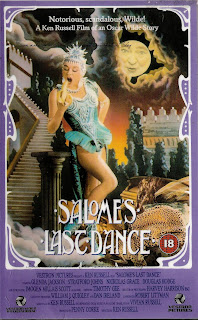 Salome's last Dance
N° : VA 17195
Year : 1988
Country : U.K.
Running time : 86 minutes
Actors : Glenda Jackson, Stratford Johns, Nickolas Grace, Douglas Hodge
Director : Ken Russel
Story : Late on Guy Fawkes Day, 1892, Oscar Wilde arrives at a high-class brothel where a surprise awaits: a staging of his play "Salome," with parts played by prostitutes, Wilde's host, his lover Bosey, and Lady Alice. The movie moves between the play and Wilde's night. In the play, Herod begs his pubescent step-daughter Salome to dance for him, promising her anything she desires. Her mother, Herodias, objects. Salome is stung by John the Baptist's rejection of her affections. The prophet's scolding celibacy puts him between the expressed desire of age and youth. Wilde dallies with a young man as he watches the show, provoking Bosey's jealousy. Two surprises await us
Posted by Dan at 7:36 AM