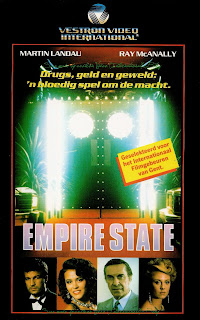 Empire State
N° : 56990 / 86990
Year : 1988
Country : Belgium & The Netherlands
Running time : 104 minutes
Actors : Ray McAnally, Cathryn Harrison, Martin Landau
Director : Ron Peck
Story : Author: (midnightschool from devon,england wrote
Empire State is an amazing film,as the trailer saya it's a 'night on the edge'...it certainly is.The film is set in London's Docklands and is one of the best 1980's club movies around.It's a real shame the film didn't get a big release...We follow the lives of very different characters arond one night at the 'Empire State' club.Don't be put off by the fact that the film has a (sort of)gay theme,there's nothing too kinky.I think that it is best watched in summer,because the settings are just right,the stylish direction is great and the songs are perfect.Watch this movie and see what you've missed in the way of a great crime/drama/thriller film... (source IMDB)
Posted by Dan at 7:42 AM