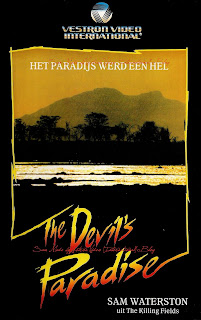 The Devil's paradise
Aka : Des Teufels Paradies
N° : 56988 / 85988
Year : 07-12-1988
Country : Belgium & The Netherlands
Running time : 90 minutes
Actors : Sam Waterston, Jürgen Prochnow, Suzanna Hamilton, Dominique Pinon, Ingrid Caven
Director : Vadim Glowna
Story : Author: maralex from Lincolnshire, England wrote :
Based on a Joseph Conrad novel, this is a somewhat wordy movie, and what action there is seems to have been filmed with as little light as possible which is quite annoying. Jurgen Prochnow plays Escher, a withdrawn, private man who is used to living virtually alone on his own island. During an enforced visit to the mainland he becomes involved with a girl called Julie, played by Suzanna Hamilton, and helps her escape from the prospect of a life of debauchery by taking her back to his island. They are followed there by the mysterious Mr Jones, played by Sam Waterston, and his young henchman who seem to be interested in Julie, although I never was quite sure why. Mr Jones is really a man who likes to spoil things; innocence, relationships, they are all grist to his mill. Suddenly Escher finds that he has something he cares enough about to fight for, and he and Julie fight for their lives and in a way their souls as they desperately try to protect themselves from the invaders. I found this part of the movie interesting, but it would have been better if Sam Waterston had been a little more frightening. He was the one person who didn't seem to have been well cast. There isn't a lot of action until the last fifteen minutes or so, but the concept is intriguing and it held my interest despite its slow pace. (source IMDB)
Posted by Dan at 7:16 AM