Challenge of the Gobots 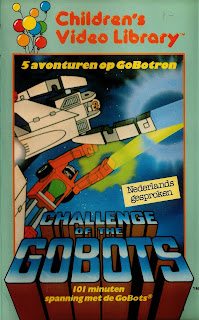 Challenge of the Gobots
N° : 54434
Year : 1986
Country : Belgium & The Netherlands
Running time : 101 minutes
Actors : /
Director : /
Story : An animated series based on a line of toys called 'Go-Bots'. A race of intelligent robots is hiding on Earth, disguising themselves as ordinary cars and motorcycles. There are two factions: the good Go-Bots, called 'Guardians,' and the evil Go-bots, called 'Renegades.' Each episode features new attempts by the Renegades to seize control of Earth and the galaxy, and the Guardian's efforts to maintain peace.
Posted by Dan at 12:26 AM