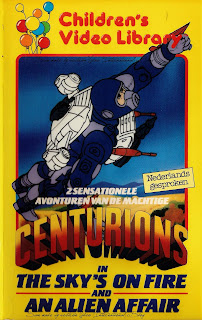 The Centurions
N° : 56735
Year : 1986
Country : Belgium & The Netherlands
Running time : 50 minutes
Actors : /
Director : /
Story : The Centurions are the most powerful fighting force of the 21st century. Equipped with special Exoframe suits, they are the ultimate fighting machines, as well as Earth's only defence against Dr. Terror and his Doom Drones.
This Tape contains episodes : The Sky's On Fire & An Alien Affair

Trailer uploaded by philnorth82
Posted by Dan at 12:31 AM