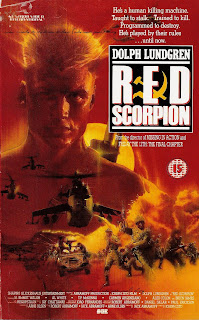 Red Scorpion
N° : VA 17324
Year : 06-12-1989
Country : U.K.
Running time : 101 minutes
Actors : Dolph Lundgren, M. Emmet Walsh, Al White
Director : Joseph Zito
Story : Nikolai (Dolph Lundgren) is a Spetsnaz-a Soviet agent par excellence trained in deep undercover work. Assigned to infiltrate and squelch a rebel African uprising, Nikolai unexpectedly finds himself drawn to the guerillas' cause, a betrayal that enrages his Russian superiors, who order his immediate termination. Making his escape through the harsh desert in the company of an adversarial American journalist (M. Emmet Walsh), Nikolai allies himself with a tribe of rebel bushmen, his fierceness in combat earning him the nickname "Red Scorpion." Nikolai's new-found independance climaxes in his leadership of the rebels against his former comrades, storming their headquarters in a lethal, no-quarter showdown
Posted by Dan at 10:56 AM