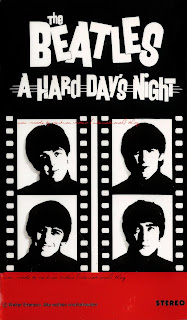 A Hard Day's Night
N° : 84118
Year : 1984
Country : Belgium & the Netherlands
Running time : 90 minutes
Actors : John Lennon, Paul McCartney, George Harrison, Ringo Starr
Director : Alum Owen
Story : A Hard Day's Night" captured Beatlemania as it was happening, and more than four decades later, it remains a peerlessly zesty rock 'n' roll fable. Director Richard Lester's jump cuts now seem exhilarating as Jean-Luc Godard's, John Lennon's wisecracks as well timed as Groucho Marx's. Yet this original Fab Four movie is innocent in a way no other later rock 'n' roll film could be, and much of the credit must go to the thousands of screaming teenage girls in the audience--the ones who's lips form such magical words as "John!" and "Paul!" and "George!" and "Ringo!" while tears stream down their cheeks. When John Lennon and Paul McCartney shake their mop tops in unison after the line "She loves you, and you know you should be glad!" it sends the audience into hyperspace. Watching The Beatles getting their first taste of audience frenzy, you understand why the '60s had to happen.
Posted by Dan at 11:07 AM