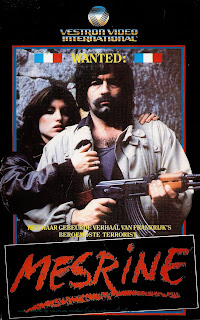 Mesrine
N° : 7312
Country : Belgium & The Netherlands
Year : 1989
Running time : 106 minutes
Actors : Nicolas Silberg, Caroline Aguilar, gerard Sergue
Director : d'Andre Genoves
story : Mesrine was the foremost criminal, public enemy N°1, the man most wanted in France, guilty of 39 crimes. "In the police or newspaper history, Mesrine broke all records". The film begins with his escape on May 8, 1978. Mesrine was the only man to escape from La Santé. We relieve the 18 crazy months he spent on the run and his encounter with Sylvia who is swept into his madness.
Posted by Dan at 1:42 AM