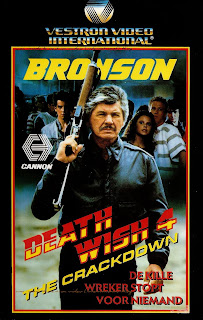 Death Wish 4
N° : 57125 / 87125
Country : Belgium & The Netherlands
Year : 1988
Running time : 98 minutes
Actors : Charles Bronson, Kay Lenz, Perry Lopez, george Dickerson
Director: J.Lee Thompson
story : Paul Kersey is back in Los Angeles, and he is dating attractive reporter Karen Sheldon, who has a teenage daughter named Erica. While Erica is at an arcade with her boyfriend Randy Viscovich, Erica dies of a crack overdose. Later, Randy goes back to the arcade, with Kersey following him. Randy confronts JoJo, the dealer that Erica got the crack from. Randy tells JoJo that he's going to the police. To prevent that, JoJo kills Randy. Kersey shows up and blows JoJo away, and watches JoJo land on the electrical roof of the bumper-car ride, where JoJo is electrocuted to death. Next, Paul gets a note and a phone call from publisher Nathan White, who tells him that he knows about the death of JoJo. Nathan explains to Kersey that after Nathan's wife died, his daughter became his whole life. Then she became addicted to drugs, and died of an overdose. Nathan wants to hire Kersey to wipe out the drug trade in LA -- and in particular to target Ed Zacharias and Jack Romero, rival drug kingpins who are the city's two main drug suppliers. Kersey asks for a few days to think about it, and after a few days, he accepts Nathan's offer. Nathan supplies Kersey with weapons and information so Kersey can go after Zacharias and Romero