A Prayer For the Dying 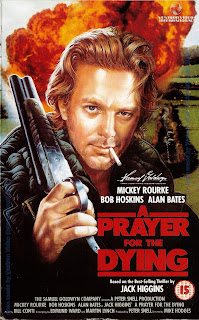 A Prayer For the Dying
N° : VA 17100
Year : 1989
Country : U.K.
Running time : 103 minutes
Actors : Mickey Rourke, Bob Hoskins, Alan Bates
Director : Mike Hodges
Story : Martin Fallon is an IRA bomber who tries to blow up a troop truck but instead kills a bus load of school children. He loses heart and quits the movement and goes to London trying to leave the U.K. and start a new life. The IRA wants him back (he knows too much) and the local crime boss, Meehan, will only help him if he performs one last hit, on a rival crime boss. When Fallon does perform the hit, he is seen by a catholic priest. He refuses to kill an innocent again and must find a way to escape the police without killing the priest who can identify him.