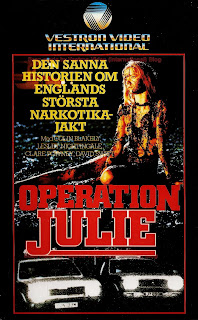 Operation Julie
N° : S269016
Year : 09-10-18-1986
Country : Sweden
Running time: 100 minutes
Actors : Colin Blakely, Lesley Nightingale, Clare Powney, David Swift
Director : Bob Mahoney
Story : This is based on a real drugs bust which took place in the UK in the late 1970s. The criminals were producing LSD on an industrial scale, much of it being produced in the unlikely setting of rural Wales, including the small town of Llanddewi Breffi – a place name which would also receive widespread publicity years later when the 'Little Britain' comedy series featured it. The investigation took several years before the police were in a position to make arrests, and the cops were led by the maverick D.I. Dick Lee (played here by Colin Blakely). Indeed it his book of that operation on which this series is based. Viewers in the UK will no doubt note, as I did, the similarities between this real-life cop and the fictional D.I. Frost in 'A Touch of Frost' drama series (superbly played of course by David Jason). ( Source IMDB - Author whatleym)
Posted by Dan at 10:21 AM