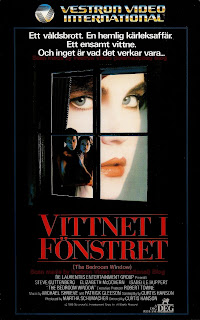 The Bedroom Window
(Vittnet I Fönstret)
N° : S 265209
Year : 1988
Country : Sweden
Running time : 113 minutes
Actors : Steve Guttenberg, Elisabeth McGovern, Isabelle Huppert
Director : Curtis Hanson
Story : Terry is having an affair with his boss' wife Sylvia. One night after an office party they are together and Sylvia witnesses an attack on Denise from Terry's bedroom window. She doesn't want to expose their relationship and so is reluctant about talking to the police. Terry, wanting to help, gives the police the description of the attacker. He soon becomes the main suspect in the case. He then sets to find the real rapist/killer with some help from victim Denise
Videotrailer uploaded by Rtrt67
Posted by Dan at 10:10 AM