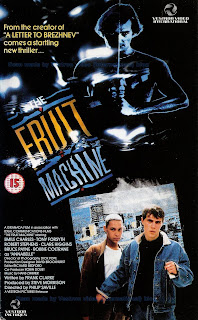 The Fruit Machine
N° : VA 17342
Year : 1989
Country : U.K.
Running time : 103 minutes
Actors : Emile Charles, Tony Forsyth, Robert Stephens, Robbie Coltrane
Director : Philip Saville
Story : The 16 years old gay Eddie runs away from home, where he's constantly harassed by his father. With his friend Michael he witnesses at the gay disco "Fruit Machine" how it's owner is slayed by killer Echo. They run away, but now the killer's after them - however after Eddie visits a dolphin show, he's more concerned about their life than his.
Posted by Dan at 6:47 AM