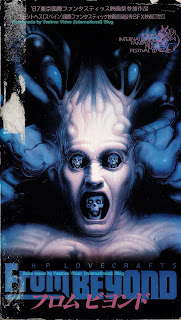 From Beyond
N°: V158F8481
Year : 1987
Country : Japan
Running time : 86 minutes
Actors : Jeffrey Combs, Barbara Crampton, Ken Foree, Ted Sorel
Director : Stuart Gordon
Story : Dr. Pretorius and his colleagues are working on a sensational experiment: by means of stimulation of the pineal gland, they want to open the human mind to higher dimensions. When the experiment succeeds, however, they are immediately attacked by terrible life forms, which apparently are floating around us all the time. When Dr. Pretorius is killed by one of them, Dr. Tillinghast is under suspect and thrown into the psycho ward due to his stories. Only the ambitious psychologist Dr. McMichaels believes him and wants to continue the experiment.
U.K. & Belgium / Netherlands From Beyond here : From Beyond
Posted by Dan at 10:34 AM

Labels: 1987, From Beyond, In Collection, Japan, videotrailer