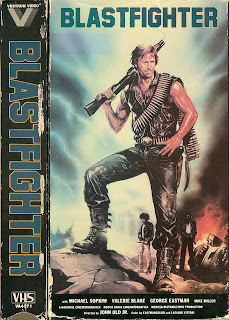 Blastfighter
N° VA 4371
Year : 1985
Running time : 93 Minutes
Country : USA
Actors : Michael Sopkiw, Valerie Blake, George Eastman, Mike Miller
Director : Lamberto Bava
Story : Jake 'Tiger' Sharp, a former Georgian police officer has been released from jail, after serving a 8-year sentence for taking the law into his own hands. Tiger decides to return to his hometown Georgia as he tries to live a quiet life and try to escape from his past. But for Tiger, things are about to get very bad. When he gets cruelly taunted by a group of deer poaches who are employed by a man from Hong Kong, who is using the deers they kill to make medicine. But when the poachers rape and kill his long-lost daughter Connie, Tiger looses his rocker. Armed with a arsenal of weaponry, Tiger, with a thirst for vengeance, decides to give the Poacher's a dose of their own medicine, as he sets out off on a violent rampage, as he blasts the poachers to pieces... (Source IMDB written by Daniel Williamson)
Thanks to VHS Wasteland for letting me use the Scan, Original uploaded there by Redguts
Posted by Dan at 2:28 AM