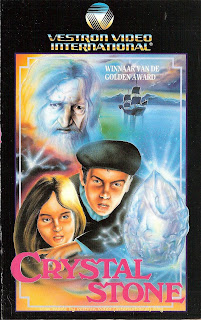 Crystal Stone
N° : 56957 /86957
Year : 1988
Running time : 98 minutes
Country : Belgium & The Netherlands
Actors : Frank Grimes, Kamlesh Gupta, Laura Jane Goodwin
Director : Antonio Pelaez
Story : Deserted by their father and left orphaned by their mother's death, nine-year-old Pablo and his little sister Maria refuse to be separated from each other by their caretaker aunt. With a cross as their guide, they embark on a perilous, but ultimately rewarding adventure in search of a mystical gem that holds the key to happiness. They escape the fearsome metal hook of a pirate and are helped by a delightfully drunken Captain in their quest for the magic stone. (source IMDB)-
Posted by Dan at 11:34 PM