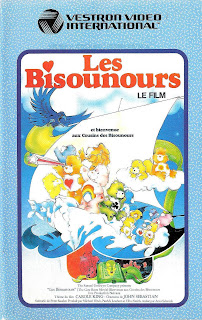 The Care Bears Movie
Aka : Les Bisounours le film
N° : 65082
Year : 15-01-1988
Country : France
Running time : 75 minutes
Actors : /
Director : Arna Selznick
Story : The Care Bears live in a country high in the clouds, where they have a lot of fun together. But they also do care for the human children on Earth, who they watch through huge telescopes from the sky, and come to help whenever there is need. Nikolas, a magician's apprentice, is in danger of getting under the influence of a bad spirit, which resides in an ancient spell book. The siblings Kim and Jason don't trust anyone anymore after being disappointed once too often. The Care Bears take them into their wonderland where they experience exciting and dangerous adventures together and quickly become good friends. ( source IMDB written by Tom Zoerner)
Posted by Dan at 8:53 AM