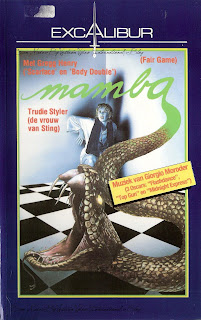 Mamba
N° : 10039
year : 16-02-1990
Country : Belgium & The netherlands
Running time : 81 minutes
Actors : Trudie Styler, Gregg Henry, Bill Mosley
Director : Mario Orfini
Story : Gene, a clever but seriously deranged computer-game designer, has been left by his fiancée Eva. Unable to win her back, he decides to take revenge by locking Eva in her new apartment, inside which he has released a deadly mamba snake.
Posted by Dan at 12:18 PM