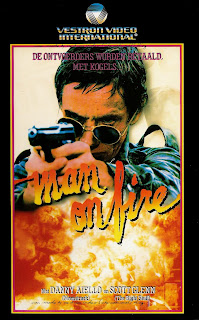 Man on fire
Belgium & the netherlands
release : 03-01-1989
running time : 92 minutes
Actors : Danny Aiello, Scot Glenn, Joe Pesci, Jade Malle
Director : Elie Chouraqui
Story : Set in Italy, a wealthy U.S. family hires a bodyguard to protect Sam (Jade Malle), their 12 year old girl from being kidnapped for ransom. The bodyguard is John Creasy (Scott Glenn), a burned-out and mentally broken ex-CIA agent, who is haunted by images of his past. Although Creasy is not interested in being a bodyguard, especially to a twelve year old, he reluctantly accepts the assignment after persuasion from his friend David (Joe Pesci). At first, Creasy barely tolerates Sam and her annoying questions about his past life and personal experiences. However, as he begins to genuinely care for Sam, his defenses drop, and he opens up to her. Sparked by her parents frequent absences, Creasy quickly becomes a friend and father figure to her. He offers her advice, guidance and help with her track and field running. Creasy's love for Sam begins to ease his trouble conscience
Posted by Dan at 10:00 AM