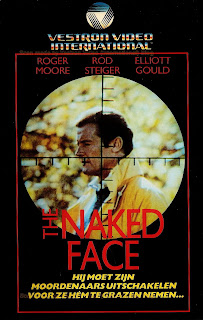 The Naked Face
N° : 54465
Year : 31-07-1986
Country : Belgium & The Netherlands
Running time : 103 minutes
Actors : Roger Moore, Rod Steiger, Elliott Gould, Anne Archer
Director : Bryan Forbes
Story : Chicago psychiatrist Judd Stevens (Roger Moore) is suspected of murdering one of his patients when the man turns up stabbed to death in the middle of the city. After repeated attempts to convince cops Rod Steiger and Elliott Gould of his innocence, Dr.Stevens is forced to go after the real villains himself, and he finds himself up against one of the city's most notorious Mafia kingpins.
Posted by Dan at 1:16 AM