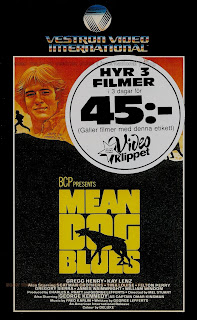 Mean Dog Blues
N° : S-11/9508
Release : 1986
Country : Sweden
Running time : 109 minutes
Actors : George Kennedy, Gregg Henry, Tina Louise, Felton Perry
Director : Mel Stuart
Story : When his friend injures a little girl in a small southern town while driving drunk, country singer Paul agrees to state in court he had been driving. But his lawyer betrays him, and he ends up in a prison farm, sentenced to 5 years. Prison turns out as living hell, when Paul not only has to work hard in the heat of the day, but the sadistic foreman uses his prisoners to train his fighting dogs, who he loves more than anyone else. And there seems to be no chance of getting away...