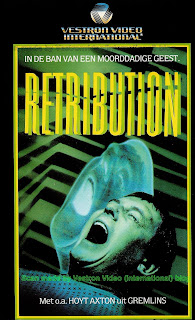 Retribution
N° : 57105 : 87105
Year : 17-01-1989
Country : Belgium & The Netherlands
Running time : 105 minutes
Actors : Hoyt Axton, Dennis Lipscomb, Leslie Wing
Director : Guy Magar
Story : At Halloween George Michael jumps down from the roof of a hotel. But he's rescued and survives. In psychiatry the young Dr. Jennifer Curtis cares for him and gives him back his will to live. However he suffers from terrible nightmares. Back home, he discovers in the newspaper that his dreams, in which he forces other people to kill themselves in most cruel ways, seem to be reality.


video uploaded by MykiiMaiku
Posted by Dan at 8:43 AM