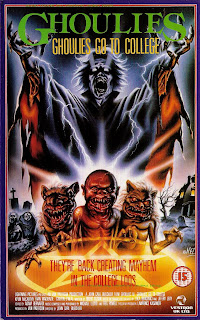 Ghoulies III : Ghoulies Go to College
N° : VA 20108
Year : 1990
Country : UK
Running time : 93 minutes
Actors : Kevin McCarthy; Evan MacKenzie, Jeffrey Levy
Director : John Carl Buechler
Story : A comic book called "Ghoulies" is found in a frat house bathroom. It secretly holds powers over three lost Ghoulies that're inprisoned within it. They're however unleashed by the Professor Ragnar. He uses them to try and put a stop to 'Prank Week' a week where all frats play tricks on the other for a tinfoil crown. The ones destined to take back the crown are Skip Carter and his frat house of party animals. He is under going problems with his girlfriend dating his arch rival for the crown, the Hitler youth Wes. When Wes frames Skip and he is expelled from school, the Ghoulies are sent to kill Skip and all frats that get in their way
This was released under Vestron U.K. LTD
More ghoulies here : Ghoulies
video trailer uploaded by paintnothing
Posted by Dan at 1:01 PM