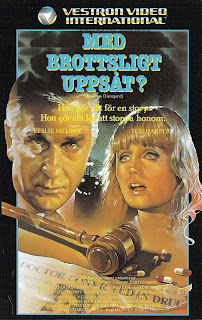 Reckless Disregard
Aka : Med Brottsligt Uppsåt ?
N° : S 269596
Year : 1987
Running time : 92 minutes
Country : Sweden
Actors : Leslie Nielsen, Tess Harper, Ronny Cox, Henry Ramer
Director : Harvey Hart
Story : Meredith Craig is lawyer who has a small practice. She is then approached by a Dr. Lucas who is a doctor at a clinic, who was exposed on a television news program as writing prescriptions for drugs in exchange for money. He says that he is innocent and asks Meredith to file a lawsuit against the program and its staff. Can a small lawyer beat a big television network? ( Source IMDB)
Posted by Dan at 11:39 PM