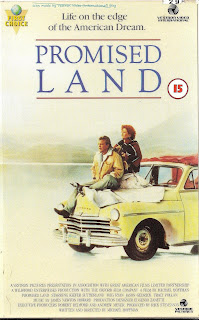 Promised Land
N° : VA 17174
Year : 1988
Running time : 110 minutes
Country : UK
Actors : Kiefer Sutherland, Meg Ryan, Jason Gedric, Tracy Polman
Director : Michael Hoffman
Story : This gritty drama follows two high school acquaintances, Hancock, a basketball star, and Danny, a geek turned drifter, after they graduate. The first film commissioned by the Sundance Film Festival, it portrays the other half of the American dream, as Hancock and his cheerleader girlfriend Mary wander to a middle-class mediocrity out itself out of reach for Danny and his psychotic wife Bev. (Source IMDB written by Owen F. Lippsett)
Posted by Dan at 2:56 AM