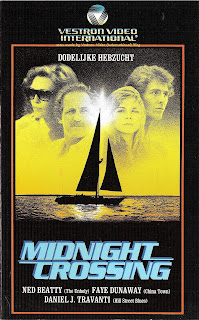 Midnight Crossing
N° : 57170/87170
Running time : 95 minutes
Year : 1989
Country : Belgium & The Netherlands
Actors : Ned Beatty, Faye Dunaway, Daniel J. Travanti, Kim Catrall
Director : Roger Holzberg
Story : A group of adventurers sneak into Cuba to try to recover $1 million in cash that when hidden when Fidel Castro took over in 1959. They find themselves trying to avoid detection by Cuban authorities while also battling modern-day pirates who are also after the treasure. (source IMDB written by Frankfob )
Posted by Dan at 2:32 AM