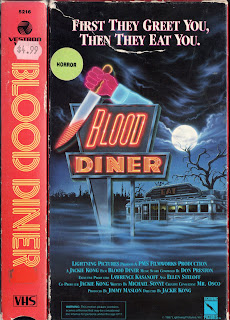 Blood Diner
N° : 5216
Release : 1987
Country : USA
Running time : 88 minutes
Actors : Rick Burks, Carl Crew, LaNette La France, Max Morris
Director : Jackie Kong
Story : Two cannibals/health food diner owners are on a wacky quest to restore life to the five million year old goddess Shitaar. Aided by their uncle's brain and penis, the two set about getting the required parts - virgins, assorted body parts from whores, and the ingredients for a "blood buffet". Their adversaries are the police: the chief with a Russian accent, the "player" detective, and the new Yorker with an Australian accent.
I try To watch this "masterpiece" several times , but for some reason I always finish the film after 5 minutes. Without a doubt, this is in my oppinion the worst film ever made & released on the Vestron label
thanks to VHS Wasteland for the Scan
Belgian / Netherlands scan here : blood diner
Posted by Dan at 12:27 AM